The Nature of Light and Colour


Several years ago, a colleague pointed me to a powerful and life impacting resource. I had been working along side Dr. Hector Acosta, a "human factors" professional, on a research project in the area of vision as it related to human performance. Human factors strives to understand and optimize things like ergonomics, performance, and acceptability.

I have always genuinely enjoyed my conversations with Dr. Acosta, and have learned a tremendous amount from him in our professional relationship. Dr. Acosta's doctoral dissertation was centered on another quite interesting research project that I grilled him about mercilessly (and he was always more than happy to oblige!).

His dissertation investigated the interactive physiological and psychological mechanisms that might be responsible for the long-known optical illusion that has been commonly referred to as "the moon illusion." Although an extremely intriguing topic in itself, I won't be going into the moon illusion here (though I might be persuaded to take that up in a future post).

During one of our conversations Hector mentioned a book he had in his library that might be able to answer one of my questions that had come up in our conversation. He turned around and exited our conversation, leaving me hanging there temporarily, and in a few moments returned from his office, holding a book out in his hand. He said: "Here it is! You really ought to read this...you won't regret it!"

I quickly thumbed through the book, noting its frequent and rather archaic/quaint hand drawn illustrations. I couldn't help but comment to him: "Cool! Looks like this thing was written in the '40s or '50s!" He responded that I was quite correct in my assumption, and that the author was a Belgian fellow. I thanked him, took the book home and devoured its 360 or so pages in just a few evenings. 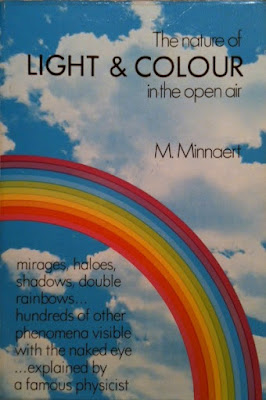 I found the book to be an incredible exposition of very diverse visible atmospheric phenomena, and of profound interest to me as an optical engineer as well as a photographer of nature. The book was written by the Belgian astronomer (both an asteroid and a crater on the moon were named for him), biologist, and keen observer of nature, Marcel Minnaert, in 1954. The volume contains detailed (and yet easily accessible by the laymen) descriptions and explanations of common atmospheric phenomena such as the blueness of the sky, the redness of sunsets, and the colors and shape of rainbows. The explanations are exhaustive (at least when the understanding is completely known by science), yet engaging and readable.

For Minnaert, these common sights in the sky are a mere preamble and appetizer for the main courses. He goes on to describe a whole spectrum of delights to be seen in the earth's sky, and on its surface as well.  He delves into fascinating detail when recounting the common (but rarely appreciated) sight of the "earth's shadow," which can actually be easily seen almost every clear evening immediately after sunset. Minnaert explores hundreds of such visible effects– from the extremely common and ubiquitous, to the fairly unusual, to the extremely rare once-in-a-lifetime sight.

When I went online to buy my own copy several years ago (the early days of Amazon and eBay), I was just about to order a copy I had come across, only to abandon the effort when I reread the description and found that it was the original Dutch language version! I finally located a paperback copy of the English translation (completed in 1954) and purchased it. The more recently reprinted book I found was the easily available "The Nature of Light and Colour In the Open Air," for which I paid about $10. An even more recent reprint, "Light and Color Outdoors," contains color photographs rather than the original drawings, but costs on the order of $100 new.

The book can give the reader a deeper appreciation of and desire to look for many very interesting phenomena that are fairly easy to experience but usually missed by the average person. I have used this book to change the way I look at the world. Previously, when I saw something amazing in the sky or on the earth, I was prompted to observe it keenly and make its memory the fodder of my future creative efforts– strictly a reactive process. Now, I more often than not walk through my day anticipating that I will see something interesting (even specific phenomena), and when I do, I am able to better understand what I am looking at, and maybe even point out the phenomenon to someone else in the vicinity.

Get a hold of this book and let it widen your horizons.
Posted by Bill Brockmeier at 9:18 PM