E. O. Goldbeck assembled thousands of human subjects to paint truly monumental insignias upon the Texas landscape. This was a unique achievement but it wasn't the only enduring mark Goldbeck left on the history of the photographic arts. He has probably been most known for his singular and signature capture of American men and women at work.

Goldbeck cut his panoramic teeth in his recording of the extent of the WWI American military. He developed his techniques while capturing their personal and corporate portraits as they were surrounded by and immersed in their considerable tools and hardware: tents, buildings, trucks, tanks, and planes. Goldbeck's underlying motif in this corporate portraiture was to use the work environment itself as the setting– even the canvas– on which he would "paint."

In 1998 The University of Texas (the final repository of Goldbeck's extensive catalogue of photographs) collaborated with Bolognesi and Bernado to curate a large retrospective exhibition of Goldbeck's work for Actar in Barcelona. An extensive selection of photos from the exhibition was ultimately published as a book, titled simply: "Goldbeck."

The book is not only a wonderful introduction to Goldbeck's work, but it is a unique view into the lives of American workers of the early twentieth century. Though for decades scores of very talented photographers have attempted to capture the working man and his worth to society, Goldbeck is one of the very few that has been able to properly and completely place his subject within the workplace itself. Only his unusual method of panoramic photography has a wide enough field of view to capture the full scope of the working ambience.

These explorations of the workingman's world that especially fascinated me were Goldbeck's images of the Holsum Bread delivery men, the U.S. Army Quartermaster shoe shop, the Postal Union Messengers, and the preachers baptizing believers in the San Pedro springs before thousands of onlookers.

Though not recorded in this book (or the other two that have been compiled), one of the most unusual instances of Goldbeck's portraits of working men was actually a fortuitous accident. Or I should say a string of fortuitous accidents. The story was related by Goldbeck himself to a long time friend of mine. My interview with her concerning this previously untold Goldbeck story will appear in my next post.

A bibliography of books on Goldbeck's life and images: 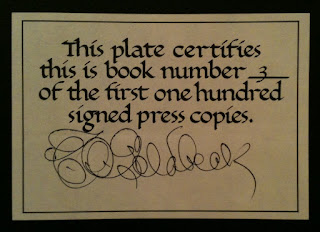 This past year I was fortunate enough to locate a pristine, numbered and signed (3 of 100) special edition of Burleson and Hickman's work published by Texas University Press. These books are Goldbeck's very last signed work, as he died shortly before the book had reached the public. It is a wonderful book delving into the details of Goldbeck's extensive life (he lived to a few years short of a century) and contains many of his most iconic panoramic photographs, most of which are reproduced in nearly the original size.

Posted by Bill Brockmeier at 11:47 PM